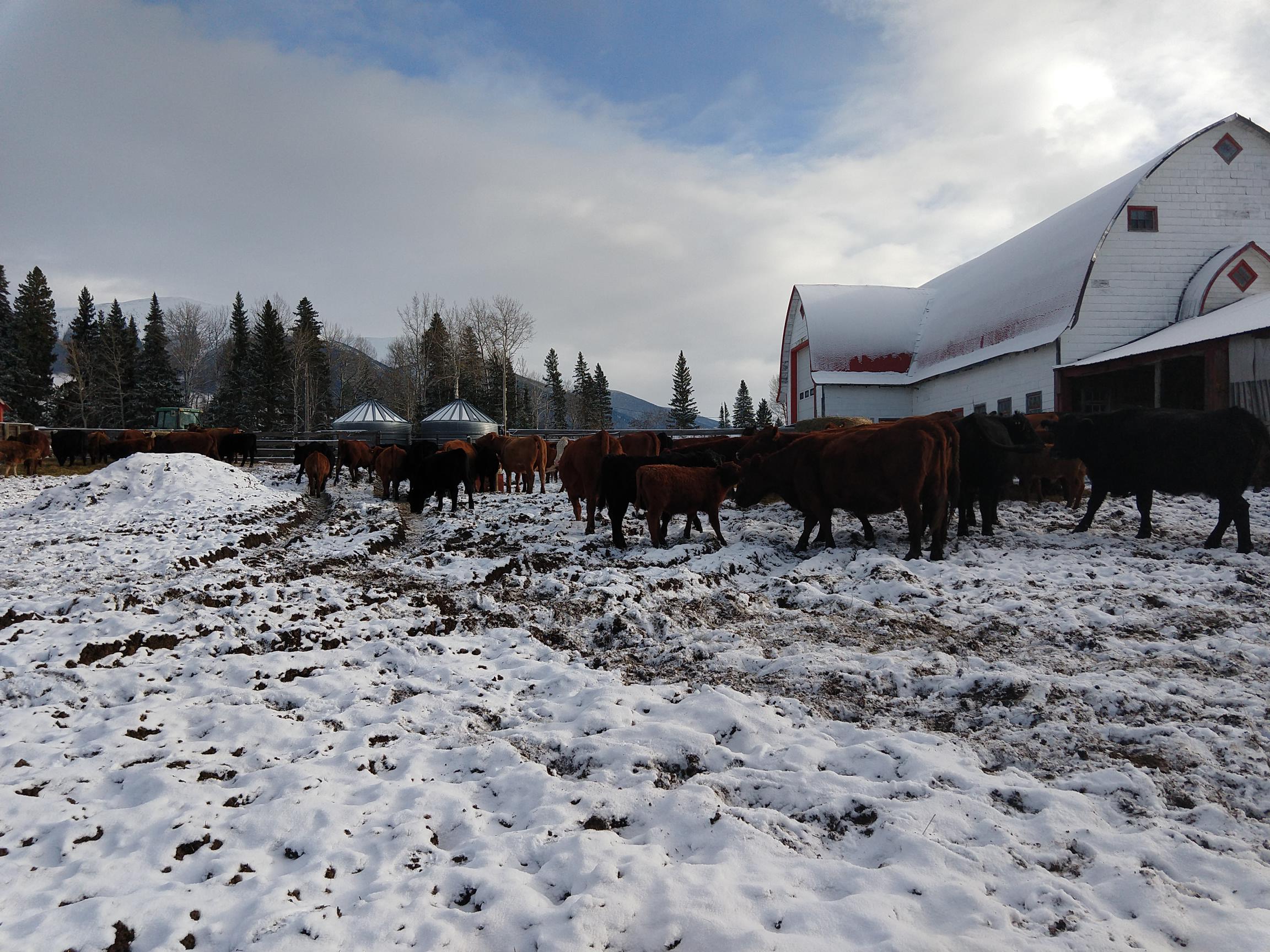 Ready for the Auction House

The cows with their calves spent the last few weeks grazing on the fields around the ranch and grew considerably, both in size and weight. For the calves this means they are ready to be weaned and sold - but before we can do that, some other tasks have to be tackled, first.

For one, the cattle had to be sprayed with dewormer and - the calves that were going to be sold - tagged with an identification number on an ear tag. For this we have a sorting area with smaller sorting pens on the ranch, with a chute and a cattle squeeze at the exit. The squeeze can be used to hold cows in place, which makes it easier to give them an ear tag or a medical check up.

So we spent the first day of sorting cows with splitting the cattle into small groups and sending them through the chute - separating cows and calves where we could - and giving them a dewormer shower and, if applicable, a tag.

Because the calves need the tags to be sold.

With all the calves already being tagged, there was not that much to prepare the day we wanted to ship them. Still, cows and calves had to be separated and the calves had to be put into the big cattle transport - a real, eighteen-wheeler one, with different compartments to keep the calves safe in.

And besides the calves, John’s uncle came over with some of his cattle to ship - and one of our bulls was supposed to go, as well. That lead to quite the chaos, because we also keep the bulls of John’s uncle over the winter at our place, and the two unfamiliar bulls in our bull pen did not make our bulls happy, at all.

The fences broke under the force of the fighting animals - but with the cows being close, the bulls didn’t just run off but simply came back after finishing their quarrel.

We still put the bull we wanted to sell into the sorting area - but because we didn’t have enough pens left, I got to play “gate” for a while to keep the bull away from some calves that would become new breeding cows for John’s uncle.

Despite the excitement with the bulls the rest of the work proceeded pleasantly problem-free - none of the calves broke out, the calves were already weaned enough that they didn’t really call for their mothers during the whole procedure and loading the cattle of John’s uncle who didn’t know our sorting area, went really well, too.

Sadly, Leah and I missed the auction livestream the next day due to an emergency flagging situation we had been called to.

Pregnancy checks for the whole herd

The last step the cows had to pass through - after a few days of rest - was the general pregnancy check. After all, it is important to know from which cows you expect a calf in the coming spring, especially because the weather when they get born is not the most newborn-friendly. It makes supervising the births more relaxed and easier when knowing which cows are still due and from which cows no calf is to be expected at all.

Luckily, the pregnancy check of the herd went by fast. We had a veterinarian coming over, with ultra sound glasses connected to a probe, and used the cattle squeeze to keep the cows immobilised while the vet checked them.

After that, the cows were finally free again to wander over the fields like they please to - yet, the growing amount of snow means we now have to feed them with stored haybales if we don’t want them to lose too much weight over the winter. Thusly, I was allowed to drive a tractor on my own for the very first time.