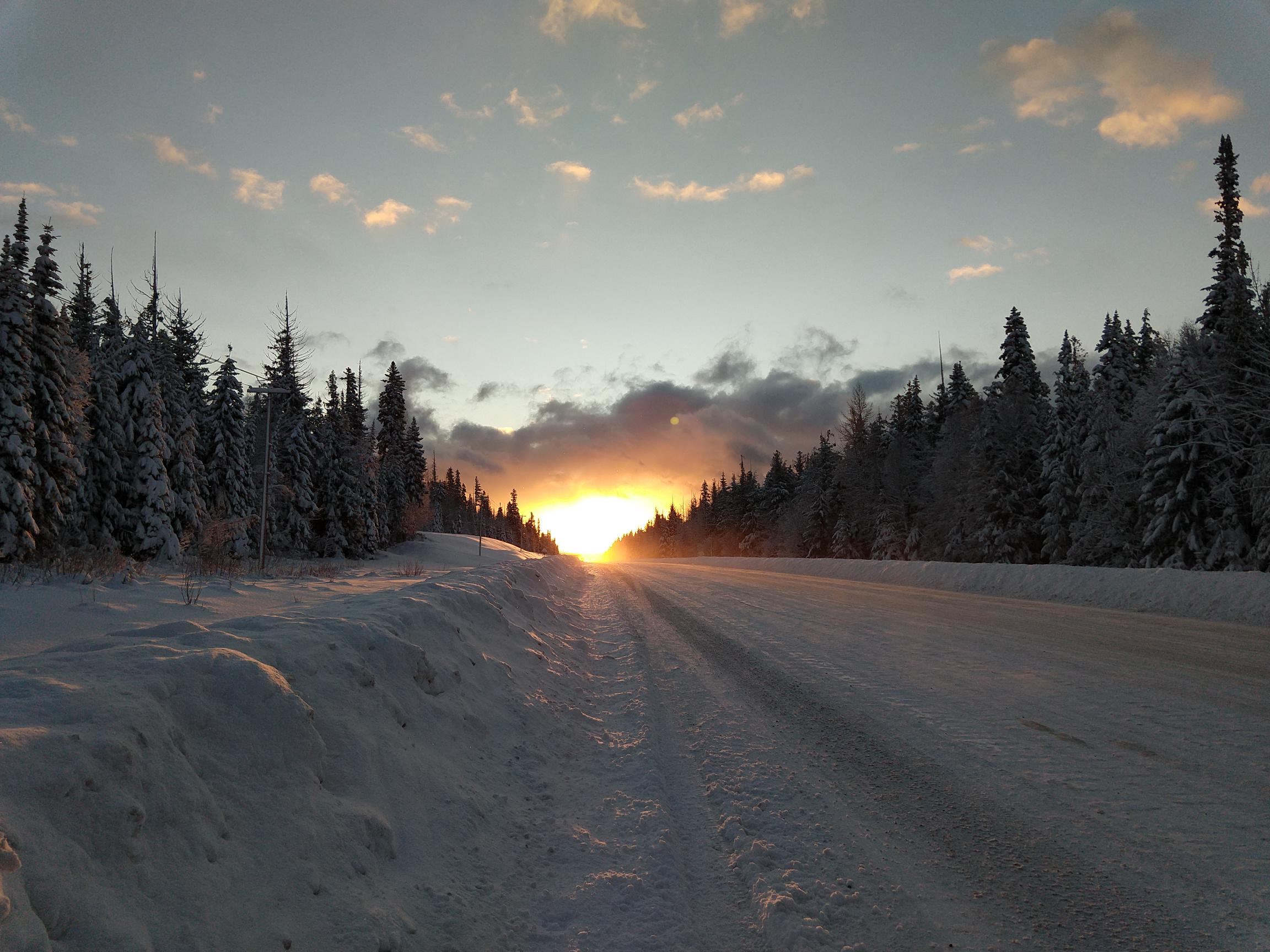 The Language of the Highway

Trip to Kamloops, the Second

A while ago, John and I got the litter of Boston Boxer puppies to Kamloops, to hand them over to their new owners. And like good Canadian Country folks, we also took the chance to restock on groceries and whatever else was needed in the house.

But this trip also had more to offer for me - because John wanted to know how confident and comfortable I am with driving a car, and thusly let me play driver on the way back.

Driving a car is no big deal for me, anymore, I got my driver’s licence six years ago now. But driving a car on Canadian highways in Winter? That’s a whole different story.

It had been snowing the days before our trip, and the roads weren’t completely freed of ice in the morning. Thankfully, they were more or less dry and clean on the way back. Still, there were a great many little things that are different on Canadian roads, in comparison to Germany, and even if the roads looked free of ice, I could never be sure if the same could be said about the next turn.

I am not the first workaway John introduces to driving on a highway. Whoever wants to be allowed to drive ranch vehicles on the highway, has to earn John’s approval for it first. And only with John’s approval you are allowed to go to town with a car or truck for the family, to get the post or buy some snacks. Thusly, John also knows all the common problems helpers from different countries with less complicated street conditions usually face.

He took the time - already on the way there - to explain things to me I should look out for. You can recognise an icy passage, for example, when you see nothing spraying up from the oncoming traffic’s tires even though the road looks wet. Additionally, road temperatures can change vastly depending on the surrounding terrain - a road is warmer on a sunny hill than it is between tall trees on the northern side of a valley. Because of that, you should always keep an eye on the thermometre, to be prepared for sudden temperature changes.

Besides the hints about road conditions, John also gave me another lesson - the Canadian way of Highway communication.

As a car driver you have access to an important communication tool - lights. With 4 way flashers (warning lights) you can tell a vehicle coming closer that you are travelling more slowly and can be passed. With the headlight flasher you can tell oncoming traffic about wildlife on the road or other dangers that are worth slowing down for. And if a transport or a vehicle with trailer is passing you, you can signal them with the headlights when they are in front of you and can safely pull back into their own lane.

Especially transport drivers like to “Thank you” with a little light show of their own.

All these small gestures remind me of motorbike driving, and how you greet oncoming drivers with a little hand gesture. They show that you are not alone as a driver, and somewhat in constant contact with all the other vehicles.

I was allowed to drive the whole way back, and even though I was really tired after the five hour drive, I also felt fantastic - for all the new knowledge I had gained and the feeling of success to have managed driving the full way back.

John already used me again as a driver the very next morning, to get the last puppy to Blue River. That was approval of my driving abilities enough.